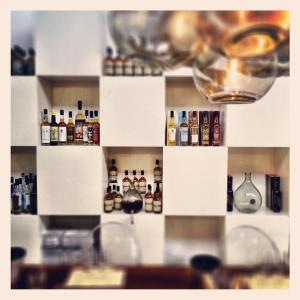 Alcohol, for many of us, is how we bring the worlds to rights. I often use the powers of wine which never fails to impress.

However, it’s very rare to find an alcoholic drink that you truly do, love. Not just for it’s ability to dissolve all your problems and whisk you away, but for everything it stands for; the taste, the texture, the history. Last year during my trip to Ireland, I spent an afternoon at the Bushmills distillery near the beautiful coastline of Causeway, and it was the first time I truly understood the process of making Whisky. I remember the thick smell of yeast, and the overwhelming scent of alcohol, which in all honestly left me quite drunk by the time the tour finished, and I hadn’t even got to the free glass at the end of it. I did, however, suddenly find myself beginning a love affair with this spirit.

The past two years have been where my boyfriend and his best mate have truly fallen in love with this fermented grain mash that we mere folk call Whisky; Many a night my best friend and I have spent, enjoying some home cooked food and a bottle or two or Rioja, whilst the men drink an entire bottle of whisky and talk complete and utter nonsense.

With nearly every weekend spent devouring whisky from recent holidays each couple had been to, it seemed somewhat apt to head down to the Compass Box Headquarters in West London, for some well overdue Whisky tasting.

As you enter, the Compass Box HQ presents a large, bright, open space, where the sun beams brightly through the windows and the colourful working hubs are neatly packed away for the weekend. We entered the tasting kitchen and our faces instantly lit up in complete admiration; A science laboratory of whisky and flavourings, left me instantly wanting to kick my shoes off and spend hours staring at the bottles, asking questions about why that one’s darker, and why is that one lighter.

A large wooden dining table was set up with test tubes, tasting tumblers and breadsticks, and neatly behind it stood a wall, delicately scattered with the most beautifully shaped bottles. We each took turns taking photos, simply admiring what was in front of us.

As we each gawped in ore at our surroundings, our wonderful host began making us a long, Mamie Taylor cocktail, which consists of fresh lime juice, Whisky and ginger ale, with some beautifully carved lime peel to garnish. Poured over ice rocks, we were handed the drinks and all you could hear were groans of complete contentment and the constant repeat of ‘thats amazaazing…’ and ‘woooooowwww’.

After being showered with drinks, tasters and some quite amazing cured meats, the girls and myself went for some wine in the sunshine, whilst the boys were left in the capable hands of the host.

The men began by learning a little about the history of whisky, and began tasting a variety of different types. Followed by some blind tasting, the chaps began to learn what whisky suited their pallet, which surprised my boyfriend as it seemed to go against everything he’d known prior. The tasting then introduced some food; cheeses, meats and freshly baked bread. I’ve never seen whisky as a spirit to enjoy with food, for me it’s simply been a night cap, but I’ve been completely wrong.

After sobering up a little with the help from the grub, the boys then created their own, signature whisky. My boyfriends whisky was built using his copious note-taking he did during the blind tasting, and resulted in a smokey, golden spirit which he called Gunnersbury 2014. My partners best friend’s whisky was built from, well the lack of note-taking, and in fact resulted in a clean, smooth, peaty drink, that he kindly names after his wife. Not that I’m jealous of the fact he instantly thought of the love of his life, and my boyfriend thought long and hard to name his after the bloody location we were in – no, I’m not bitter at all….but I will admit i preferred my boyfriends creation which tasted smooth, silky and reminded me of a log fire in the country. Plus I can pop to the shop and grab some tippex and change the name of his whisky anytime…

Despite the mix up of naming conventions, I truly wished I’d stayed and joined the boys for the tasting. They honestly did have one of the best Saturday’s in a long time, and came practically skipping to the pub to meet us for dinner. I would most certainly recommend tasting at the Compass Box if you can; even if whisky isn’t at the top of your list, I’m sure you’ll go home rosey cheeked and pleasantly surprised. 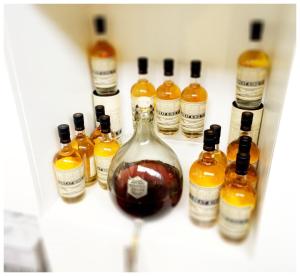